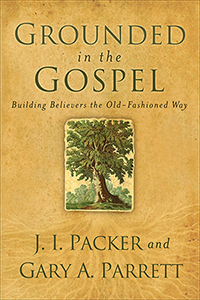 When a book is loaded with some of my favorite BILD terms (such as kerygma, didache, catachesis), it really gets my attention.  Consider this great quote from Grounded in the Gospel: Building Believers in the Old-Fashioned Way by J. I. Packer and Gary Parrett.  “Perhaps 2 Timothy 2:2 best portrays the idea of raising and cultivating catechists [the teachers]” (p. 196).

Packer and Parrett make a superb contribution in this book by building a very strong case for the biblical concept of catechism, which they define as “the church’s ministry of grounding and growing God’s people in the Gospel and its implications for doctrine, devotion, duty, and delight” (p. 29).  My favorite part of the book was Chapter 2 “Catechesis is a (Very!) Biblical Idea.” The authors state that, “One of the most important arguments for ministries of catechesis today derives from the simple fact that believers have been commanded to teach others catechetically” (p. 47).  The chapter concludes, “Catechesis is, indeed, a very biblical idea!  More than that—the ministry of catechesis is actually a biblical imperative” (p. 50).

The term “old-fashioned” in the book’s title and first chapter is clever and could hearken back to the first century, but in the book it refers more to models used in the fourth/fifth centuries and to the Reformation.  Packer and Parrett use the apostle’s letters to make the case for catechism, but don’t really find the content and model for catechism there.  The historical models they present are insightful and helpful, yet it seems that doing more with the catechetical model of the early church, as a biblical model, not just a biblical mandate would have been appropriate since the authors make a case for the New Testament writings being “explicitly catechetical documents” (p. 44).  Similarly, the book’s biblical kerygmatic statements are summaries with little attention to the actual statements of the apostles presented by Luke in Acts.

A rather elegant model is presented in Chapter 4 of the content that Packer and Parrett recommend for catechesis.  It is called “5-4-3-2-1” which refers to Five Founts (Triune God, Scripture, the Story, the Gospel, the Faith), Four Fixtures (Creed, Lord’s Prayer, Decalogue, Sacraments), Three Facets (The Truth, The Life, The Way), Two Fundamentals (Love of God, Love of Neighbor), and One Focus (Proclaim Christ).  As you can tell from the model, there may be some important things missing from a BILD perspective.  For instance, the church itself is assumed, participation in the church is presented largely through worship services (probably because that is where the sacraments are dispensed) rather than as a family of families, there is not a synthesis of the practical instructions of the epistles related to household order, and the apostolic mission of church planting and church establishing does not seem to be emphasized.  I wonder if Packer and Parrett would think that BILD’s First Principles are too simplistic, too focused on Paul’s letters, and not connected tightly enough to the historic church and its institutional expressions.  It would have also been interesting if the authors had done more critique of current Christian Education curriculum and formal theological education programs, perhaps re-envisioning seminaries and Bible colleges are training programs for catechists based on their model, especially in light of their recognition of 2 Timothy 2:2 as referring to catechists.

Packer and Parrett get practical in Chapter 9 and show what their model could look like when implemented in a church.  They present it in terms of three phases: procatechesis (perhaps better called precatechesis), catechesis proper, and ongoing catechesis.  They also address the program in terms of its formal, nonformal, and informal manifestations.  It is in this chapter that the concerns from a BILD perspective mentioned above are confirmed.

The various levels of a catechism are presented in a manner than helps determine levels of dogmatism (my word, not theirs) and nature of compliance (again, my word) that should be associated with the various levels.  There are matters of Christian Consensus (that extend beyond evangelicalism), Evangelical Essentials, Denominational Distinctives, and Congregational Commitments (p. 150).  This also illustrates the author’s aptness for alliteration (see, I just did one there myself).  This taxonomy is extremely helpful in thinking about what it means to be orthodox and biblical.

Toward the end of the book, in the practical section, the authors challenge us to “accurately assess the current situation” (p. 198).  However, they never even mention the idea of assessing the catechumens [students].  It seems that any catechetical system must have a trustworthy assessment component to be truly effective.  The description of the causes for the historical decline of catechesis in Chapter 3 on “The Waxing and Waning of Catechesis” provides a nice set of warnings to be heeded in practical implementation.

Perhaps my biggest concern with the book is evident in the subtitle “Building Believers.”  It is vitally important to build believers, but we are building believers in order to build churches and participate in the progress of the Gospel.  Of course, I don’t think that Packer and Parrett would disagree, but they don’t do enough to address this explicitly in their book.  One of the hazards of evangelicalism has been to make assumptions about the local church, invest heavily in parachurch ministries, and marginalize churches in the process.  For decades, evangelicals have attempted to build up believers and train leaders without focusing directly on the strengthening of churches, and now we all bemoan the general state of irrelevance and biblical illiteracy in our churches.  The New Testament model of catechesis in the early church emphasizes “equipping the saints for ministry . . . so that the body of Christ may be built up . . . attaining to the whole measure of the fullness of Christ” (Ephesians 4) as the core work of the church so that it can participate fully in the progress of the Gospel.  It was a matter of “strengthening the churches” (Acts 15:41), not just “building believers.”  Packer and Parrett describe the “ends for which we catechize” (pp. 184-5) largely in terms of the development of individuals and “unity” is largely a matter of common beliefs and worship practices.  However, catechesis is not a just program that a church offers to individuals, but the essence of what a church is as a corporate unit on mission in Christ’s kingdom.

Let me end with one of the nearly hidden gems of this book.  Gary Parrett is a prolific hymn writer.  The first appendix provides several hymns that are very well-suited for catechetical use.  The role of music as a catechetical tool has been terribly overlooked, particularly in light of passages that tell us to “admonish one another with songs, hymns, and spiritual songs” (Col. 3:16).  Many BILD partners around the world that work in areas characterized by oral culture give testimony to the power of song in the communication of the Gospel, building up of believers, and even the training of leaders.  And in these cases, there is no doubt that “building believers” is being done in the context of planting and establishing churches to participate in the progress of the Gospel.